by Caryle Hirschberg and Brendan O’Regan

In 1993, the Institute of Noetic Sciences published Spontaneous Remission: An Annotated Bibliography. In this work, the authors, Caryle Hirshberg and the late Brendan O’Regan, defined spontaneous remission as “the disappearance, complete or incomplete, of a disease or cancer without medical treatment or treatment that is considered inadequate to produce the resulting disappearance of disease symptoms or tumour.” 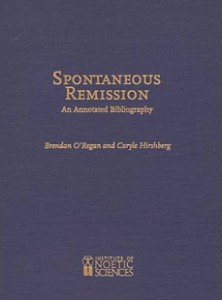 Because there was no standard reference for the field of spontaneous remission before that time, the first task of the Remission Project at IONS was to catalogue the world’s medical literature on the subject. As a result, it assembled the largest database of medically reported cases of spontaneous remission in the world, with more than 3,500 references from more than 800 journals in 20 different languages.

While the authors believe that the phenomenon of remission is relatively rare, the data from their research suggest that it may not be as rare as previously believed. It appears that the impression of rarity is at least partly an artifact of underreporting, but research shows there has been an increase in the number of cases reported in the last few decades.

Spontaneous Remission: An Annotated Bibliography was compiled by Caryle Hirshberg and Brendan O’Reagan. It is organized according to the International Classification of Diseases (ICD-9-CM 9) system.

It is divided into three sections: “Part One: Remission of Cancer” (chapters 1-10), “Part Two: Remission of Diseases Other Than Cancer” (chapters 11-19), and “Part Three,” which contains four appendices and an addendum. Each section contains annotated bibliographic citations—including summaries and in some cases complete text of case reports—and supplemental references.

All the documents in the bibliography are downloadable in PDF format: